Sustaining our bodies with healthy food is a big part of our goals.  A sustainable solution is making soups that have a lot of flavor and are filled with seasonal, organic, and locally-grown veggies. Sometimes I like a hearty, nutrient dense soup.  Other times, I like a light-weight soup to accompany a meal or as a mid-morning snack.  During the summer, I even like cold soups. The soups I describe below will never be mistaken for a canned soup.  That's for sure.

I hope you enjoy them as much as we do.

Hearty soups
For a soup that is a whole meal in a bowl, I like to start off with some really bold flavors, like onions, garlic, dried peppers, carrots, and fresh or dried herbs (see the first video).  You could also use sun dried tomatoes, prunes, or raisins.

For most hearty soups, I like to use meat and beans or peas.  The one in this case is peas.  We love fresh, black-eyed peas with sausage, but you could use venison, pork, chicken, or whatever you have.  Left over meats work out fine too.

These peas are grown locally, and we buy them in the summer at the farmer's market. (If you use dried beans or peas, then I suggest you soak them in room temperature water for at least 4 hours and up until 8 hours. If you cant cook them after 8 hours, rinse and store in the fridge.)  We put the peas, carrots, dried peppers, and herbs in a pot with some stock, add salt and pepper, and bring to a boil  for 20 min.  Then reduce to a simmer. Then I let them simmer until the peas/beans are soft enough, but not mushy.

There's nothing quite as wonderful as roasted onions and garlic. The sizzle of the skillet tells you the secret - there's something incredibly interesting in there.  You smell the sweetness of the onions as they caramelize. The garlic turns soft and mild.  It's still garlic and pungent, no doubt, but it loses the bitterness of raw garlic during roasting.  It takes about the same amount of energy to do a big batch or a small one, so I usually roast a big batch at one time and use them for all sorts of dishes. It doesn't take up much of the grill so make some cornbread or roast some chicken at the same time.

After roasting, i chop the onions and mash up the garlic and put it in the soup.  How much?  oh, I cant get enough of caramelized onions, but a few cloves of garlic is enough for a 4 quart pot of soup. 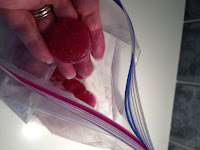 Also, one thing to know about making hearty soups, if you don't add something acidic, it will taste too earthy, too muddled, or too rich.  For a 4 quart pot of soup, I'll use less than a teaspoon of something acid.  For beans or peas, I might add a bit more towards the end of cooking if I think it needs something else. Adding something acidic brightens the individual flavors and can replace salt in some cases.  I sometimes use lemon juice, vinegar, soy sauce, or even tomato water.  When I have some on hand, I may use my own cider vinegar.
The picture of my hand with a red frozen disk shows some frozen cider vinegar that I made from organic apples and blueberries.  I froze them into silicone mini muffin pans for easy storage in a plastic bag or mason jar.  It has a very sweet, fruity flavor and smell, and it is a strong vinegar, so a little goes a long way.

Occasionally, we have made a bean or pea soup that was a bit blah at the end.  That happened we didn't season and taste as we went along.  Starches absorb a lot of flavor. Try a another sprinkle of salt or acidic liquid.  If it needs a little extra oomph, then you could add a 1/8 tsp of mustard or tamarind paste or add a little fresh herbs, such as oregano, thyme, or chives.  I also like to add a dried chili pepper for a little kick.

The trick with bean and pea soups is to add a little bit of meat or add some homemade stock.  You don't need much at all.  These soups go a long way.  You can eat them with rice, orzo pasta, or cornbread.  On top, I like to add a bit of cold diced veggies, like tomatoes, celery, or red onions. Another topping option:  fermented spicy carrot sticks or fermented sauerkraut.  (yah for live foods fermented veggies!).  Occasionally, I'll put a dollop of home cultured sour cream or yogurt.   Anyone that said bean soup was boring has never eaten it at my house.

We almost always have leftovers, which can be eaten the next day or frozen for next week.  Sometimes we find that we end up with not a lot of liquid because the beans/peas soak up the liquid.  So, in that case, I break out the hand blender.  You can use it cold or in a hot pot.  I make bean dip out of it and serve it with celery sticks and

This is the hand blender that we use.

Well, that's a bunch of information about soups... but I know some of you like to have the actual recipe too.  Several years ago, I gave my friends Heidi and Wade my recipe for black-eyed pea soup.  I change it up every time I make it so it is never the same.  But if you go to this link, you'll get my original recipe and it has been tried and tested.  If you try it out, please let me or Heidi know by commenting on our blogs.

Heidi is a wonderful cook, so be sure to check out her other recipes as well.

I'll be posting about other types of healthy soups to sustain us, so check back soon.

We get a lot of email with questions and comments, so please comment here where all of our friends can chime in too!

What does sustainable mean?

meaning: The capacity to endure while remaining diverse and productive over time. The potential for long-term maintenance of well being, which has ecological, economic, political and cultural dimensions.

We focus on primarily on the Texas Hill Country areas, but a lot of our content also applies to Houston and Southwest Louisiana areas.

Get this blog delivered to your Amazon Kindle Sustainable Solutions